In this episode, Mark talks with Jim Stenkevitz, retired modeler, about his 25+ years of teaching physics using the modeling approach, as well as his experience leading workshops and being on the board for AMTA. 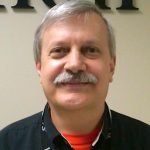 Jim Stenkevitz majored in physics and earned his masters degree in physics education. He was introduced to modeling at the University of Illinois Chicago in 1995. He used modeling for the rest of his career as a physics teacher. Additionally, he led physics workshops, helped to bring modeling instruction to other teachers in his school and district, and served on the board and as president of AMTA.

[17:25] Jim Stankevitz “I think I became pretty good at questioning and leading whiteboard discussions without giving answers. …And I think that was, it was the thing I found at the very beginning was hardest for me to do. So I think I really pushed myself to focus on that. And I think I got pretty good at it after a while.”

[31:29] Jim Stankevitz – encouragement for new modelers “stick with it, be open about what you’re doing and why you’re doing it and give it time. And if you do, I think you’ll be amazed at what your students are able to accomplish.”